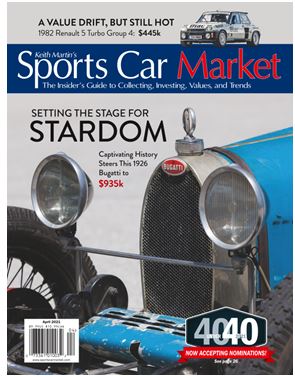 Sports Car Market Magazine, the popular publication for classic and collector car enthusiasts, is seeking nominations to honor 40 enthusiasts under 40 years old who are making a difference in the classic-car world.

“Anyone participating in the hobby and/or business whose enthusiasm for collector cars deserves to be recognized may be nominated,” said SCM Publisher Keith Martin, who founded the magazine in 1989.

Candidates can come from the business of buying or selling, restoration, aftermarket parts, events, detailing or insurance. Those involved with dealers or auction companies, both online and land-based, are eligible. They can also be collectors, writers and even social-media influencers.

An inaugural group of honorees was chosen in 2017, men and women ranging in age from 23 to 40. This list included enthusiasts and influencers from a variety of hobbies and professions, such as auction specialists, lawyers, sales reps, marketing specialists, CEOs, appraisers and collectors.

“This program became our most popular in terms of industry recognition, so we thought it was time to re-launch it for 2021,” added Martin. The roster of 2017 honorees may be found HERE.

“The demographics of the old-car world are always changing,” said Executive Editor Jeff Sabatini. “In recent years, there’s been more focus across the hobby on boosting interest among younger collectors, who will carry the torch for classic cars well into the future.

“For this reason, we’re seeking to recognize the most enthusiastic and dynamic young influencers in the hobby and business of classic and collector cars. We know they’re out there, and we’re asking our readers and fans to nominate them.”

Nominations may be made by completing a form on SCM’s website at sportscarmarket.com/scm40.

Nominators should include their own contact information and that of the person nominated, plus a short paragraph explaining why this person is exceptional and worthy of being honored.

Nominees must be younger than 40 as of January 1, 2022. Previous honorees are not eligible. Contact SCM Executive Editor Jeff Sabatini at [email protected] with any questions. Nominations close on May 15, 2021.

Publisher Keith Martin founded the monthly Sports Car Market magazine, based in Portland, Oregon, in 1989, and it has developed into the authoritative voice of the collector car hobby.

Martin has been personally involved with the collector car hobby for more than 40 years. As a writer, publisher, television commentator and enthusiast, he is constantly on the go, meeting collectors and getting involved in their activities throughout the world.

His columns on collecting and reviews of exotic cars have appeared in The New York Times, and he’s been an emcee at the Pebble Beach Concours d’Elegance, Concours of America, Concorso Italiano, Legends of the Autobahn, and many other events. He was honored with two of the most prestigious awards in the collector car hobby – The Lee Iacocca Award and the Edward Herrmann Award, and has been inducted into the Concorso Italiano Hall of Fame.

Martin has hosted numerous television specials, was the co-host of “What’s My Car Worth” on the Velocity channel and served as Chairman of the Meguiar’s Collector Car Person of the Year Award. He’s on the Board of Trustees of the LeMay Museum and has served on the faculty of the Collier Museum Symposium on Connoisseurship.

The Renault 5 Prototype, the wink is in the headlights – part 2


After a first episode devoted to the reinterpretation of the cult look of the original R5, we take another look backstage at Renault Design. In the spotlight, François Leboine, Director of Design Concept and Show-Cars at Renault. He explains how to succeed in the retro-futuristic exercise carried out on the Renault 5 Prototype, building a bridge between past and present.   more >>


Point S, the global tyre and car maintenance specialist, is launching the new version of its summer tyre, which is even more efficient, offering greater safety and longevity. And which, for the occasion, is changing its name. The more >>


•    FordPass Connect has arrived in South Africa, now fitted as standard on all Ford Ranger XL, XLS, XLT, Wildtrak and Ranger Raptor models – as well as the new Ranger FX4


Groundbreaking Held During Internal Ceremony with SC Secretary of Commerce Bobby Hitt.    New 67,000 Square Foot Building Will Open in Summer of 2022.Officials of BMW Manufacturing, along with So more >>


….and commits to accelerating the electrification of its fleet    British Gas commits to electrify its commercial fleet, the 3rd largest in the country, by 2025, five years earlier than its previous commitment and well more >>


A SHORT video explaining how to let a police car past when there are solid white line down the middle of the road is one of the social media sensations of the past few days. The video, which combines clear, simple animation with footage from real road scenes, has been viewed more than 41,000 times on Twitter alone in just four days. more >>


Fleet of Kia Vehicles Has Been Utilized for Hands-on Defensive Driving Training Across the U.S. for Eleven Years    Teens who graduate from B.R.A.K.E.S. are 64-percent less likely to be in a crash in their first three years of driving & more >>


A prototype of the new Grecale SUV has been photographed outside the historic Maserati plant on Viale Ciro Menotti in Modena. The employees were the first to diffuse these images on the social networks.Innovative by nature, Maserati decided more >>


Suzuki GB PLC is very pleased to announce some further enhanced finance offers on Swift SZ-L and SZ-T Hybrid models until the end of March 2021. A £1,000 customer deposit allowance is now offered for 0% PCP and HP customers and applies on both manual and optional CVT transmissions. more >>


•    The Fiat Professional bestseller, unveiled in 1981, reached a major milestone in 2020: according to Dataforce, it became the best-selling commercial vehicle – of all segments – on the European market for the first time in 40 years. more >>


SKODA KUSHAQ: Design sketches offer a preview of the new SUV for the Indian market


› ŠKODA incorporates the striking design of the VISION IN concept study into the series production version of the midsize SUV› The ŠKODA KUSHAQ marks the start of the INDIA 2.0 product campaign› The official launch of the new KUSHAQ is set for 18 March 2021


King of the hill: Opel Grandland X plug-in hybrid with high power and recuperation    Dynamic with strong torque: Opel Corsa-e and Mokka-e feel at home in the mountains    Like a train: Opel Combo-e and Vivaro-e pull strongly uphill  more >>


SEATs hybrids together for the first time


21 of the most expensive car number plates in UK


Auto Trader announces list of 21 of the most expensive number plates ahead of March number plate change    The online marketplace for new and used cars has also released leasing and new car deals for buyers to snap up with savings of up to £7,600Despite the third national lockdown, consumers’ confidenc more >>


Winter tyres specially developed for the fastest MINI series production car and model-specific alloy wheels enable extreme driving pleasure in any season. It accelerates from standstill to 100 km/h in 5.2 seconds and reaches a top s more >>


Ford is introducing a new seven-speed automatic transmission option for electrified EcoBoost Hybrid powertrains that will for the first time enable drivers who want an automatic gearbox to reduce their CO2 emissions and save money using Ford’s 48-volt mild hybrid technology.1 more >>


Back to basics with the Volvo P1800 Cyan in northern Sweden


Cyan Racing chief engineer Mattias Evensson and his crew headed to northern Sweden with the Volvo P1800 Cyan, throwing the car sideways between the snow walls in -20 degrees Celsius.


The new Carnival MPV pushes the boundaries of design and innovation to become a multifaceted and unexpected companion.


This three-row, seven- or eight-passenger adventurer takes on a bold and boxy appearance that follows the same visual language that defined more >>


As Lexus’ flagship sedan, the LS is expected by customers to provide supremely smooth performance, not just on the open highway, but in everyday driving too. With this objective in view, Lexus has made improvements to the LS 500h’s Multi Stage Hybrid System, raising the bar yet more >>


Interview Michael Steiner: The opposite of being a passenger is a Porsche


Member of the Executive Board for Research and Development Michael Steiner on driving desirable cars, the next generation and finding pleasure in nature.Mr. Steiner, why is the “Black Forest cabin” in the middle of the test track more >>


Juke, Qashqai and X-Trail sales collectively surpass one million mark in 2021Nissan GB is celebrating the sale of its one millionth crossover vehicle to UK customers, the first car brand to achieve the major milestone. more >>


The famous American saxophonist and composer Kamasi Washington is the author of the song for the new CUPRA Leon e-HYBRID commercial    Washington took on the challenge of creating a tune to match the emotions of driving the first electrified model of the brand    Strength, exclusivity, sustainability an more >>


An interpretation of a classical Japanese meditation garden is the winner of the second UX Art Car design competition. “Zen Garden,” by Valencia’s Clap Studio, sees the entire bodywork of Lexus’ premium compact crossover covered in a pattern of thousands of paper petals. more >>


The Renault 5 Prototype, the wink is in the headlights


A cult car from the 70’s with winking headlights, does that mean anything to you? The R5 of course! Its mischievous look is part of our heritage and the Renault 5 prototype unveiled in January cannot deny its ancestor. Nicolas Jardin, the prototype’s exterior designer, tells us how he reinterpreted the famous look of the original Renault 5 in a modern way. more >>


….Allowing Customers to Shop Their Way with Added Peace of Mind    Ford, in collaboration with its dealers, launches a used-vehicle digital marketplace that gives customers the best and widest selection of certified pre-owned Ford vehicles and the choice to shop online or in person     Ford Blue Advantage, powered more >>


•    V8 TDI engine with 310 kW and 900 Nm•    The SQ7 and SQ8  introduces a performance stint to the luxury C-SUV segment•    Now available in South Africa through a limited, once-off launch opportunity more >>

Betty Heath: Text from the Perfectly

Sun Feb 28 , 2021
ike lots of some others I grew up in the South through the segregation several years. The governor in Arkansas in the course of my large school a long time seemed to always be in the center of the struggle to maintain the South segregated, specifically the colleges. In the […]