After Hurricane Harvey’s flood waters had receded, Ron and Kristy Crabtree thought it might be time to move from their Katy home.

They’d raised their two children there and hosted plenty of family and neighborhood wiffle ball games and pool parties. There were plenty of memories in this place they’d built in Kelliwood Lakes in 1996, but the experience of watching flooding come closer and closer to their front door scared them.

Though their street looked like a river and water was still five feet away from their front door, the experience prompted them to assess their future.

They checked out a number of options, even considering acreage in Fulshear, attending open houses and looking at new home options.

Ultimately, living near their dental practice and their children and grandchildren was more important. Ron and Kristy launched Crabtree Dental in 1986 — he’s the dentist and she runs the business side. Now, their son Colby Crabtree works there as a dentist, too, and Colby’s wife Talyn is Kristy’s assistant.

Daughter Lauren Laird — who grew up working in her parents’ business — now helps her own husband, Aaron Laird, in his practice, Laird Orthodontics, nearby.

A land survey and study of potential flooding revealed that their Katy home was safer than a move to the country. They were left with the feeling that they were living in a home that may have felt great 25 years ago, but now felt dark and clumsy.

More than a year after Harvey prompted them to consider other options, they decided on a renovation that addressed every room in their 5,500-square-foot home except for the primary bathroom, which they’d remodeled a few years earlier.

“We looked at new homes in other neighborhoods. They were new neighborhoods with no trees and houses that cost $1.5 million to $2 million homes. We really appreciate the trees and our neighbors,” said Kristy, 61. “I said to Ron, ‘if we can remodel to have a house like those, then we can stay.’’’

Planning, construction and decorating all together took a couple of years, finishing not long after the pandemic began.

On the first floor, crews from Brooks Construction Group in Katy — with interior design help from Amy Vonderau of Amy Vonderau Interiors — created an open floor plan and extended the back of the living room by several feet.

Removing structural support beams from a long, angled kitchen peninsula meant a new I-beam had to be inserted to support the home’s second floor.

“(The peninsula) was all load bearing. Demoing that was one of the hardest challenges,” said Trey Brooks, a vice president at the family-owned construction business. “You can’t just go in and hack away — you have to be cautious and aware of what you are doing. … It changes everything in the house, though.”

The Crabtrees knew they wanted to keep a double dishwashers and double oven layout, and added an induction cooktop, with a separate gas burner on the side.

“You want that wowie zowie factor. If it’s high ticket put it in a spot that shows it off,” Vonderau said of the beautiful Ann Sacks tile backsplash on a back wall that complements the Taj Mahal quartzite on the counters. “It’s a small space so it doesn’t break the budget. It was one of the first things we were inspired by and we built the (kitchen) finishes around that tile.”

Since their children are grown, the Crabtrees didn’t need a traditional family breakfast area. They opted for a small round table with a settee and a pair of ottomans that tuck under for when their grandsons, 5-year-old Branson and 2-year-old Crew Laird, visit. When more people are over, they head to the dining room or outdoor pavilion.

The living room grew when a screened-in porch was incorporated into the house. For a while that meant the back of the house was completely exposed, but it was winter so they didn’t have to worry about suffering in summer heat without air conditioning.

Not only did it give them more room, the wall’s new windows filled the large room with more natural light.

For this room they brought in a large sectional and a pair of club chairs, and built-in cabinets along the back wall — paired with shelves above — allowed them to incorporate some of their old things — antique botanical prints and a 200-year-old grandfather clock — with their new style.

They always had a home office, but now it’s equally functional for both Ron and Kristy. Luckily they opted for a long, new desk with work spaces for two people. The pandemic started just a few weeks before the house was finished, so Kristy was able to start working from home immediately.

Vonderau had the dining-room furniture painted and reupholstered the chairs, brought in new hostess chairs, then painted and wallpapered the walls and added draperies.

“Amy was good about keeping the things that meant something to us,” Kristy said. “We got rid of end chairs and replaced them with new ones. Back in the day you bought the matching set but no one does that anymore.”

The home taps into another big trend: more luxurious and functional laundry rooms. One minor change brought big results: replacing a swing door with a pocket door. Before, the counter space behind the swing door was dead space, because you couldn’t get to it unless the door was closed.

The Crabtrees already had a nice pool and patio and plenty of room for wiffle ball games. They wanted a new pavilion with cooking/dining space and a seating/living area. This new addition has automated screens that can come up for a wide open pavilion, or closed when they need to keep mosquitoes or rain out.

“It is a joy to live here. We’re in a pandemic? Our family can get together outdoors and live. We have really enjoyed it,” Kristy said.

A center fireplace keeps them cozy in the winter, and ceiling fans keep a breeze going when it’s warmer. It has a full working kitchen, so they can do prep, cooking and cleanup all in one place rather than hauling things to and from the kitchen in the house.

While many building pavilions opt for limestone and a Hill Country look, the Crabtrees stayed with traditional red brick that matched their home.

“We tied the cabana into the home to make it look intentional. You have to think about the roof pitch, the level of the slab and the brick,” Brooks said. “You stare at a piece of dirt and understand what it will become.”

Bigger holiday dinners and parties haven’t happened yet, but the Crabtrees have made plans for events this summer and fall.

“It is amazing how much we have used it,” Ron said of the pavilion.

Other upgrades in the backyard include the now resort-style pool, a raised vegetable garden, a putting green and a basketball court, where Ron, 65, likes to play.

Before the pandemic he played in a pickup league, often with much younger guys who nicknamed him “LeRon.” So the post of his new hoop reads: “LeRon’s Court,” a surprise gift from his children.

“I always had a basketball hoop, but we were going to have to pour some concrete here anyway, so I wanted it done right,” Ron said. “When the pandemic hit, we couldn’t play, so I was out here shooting every day. I’m back to playing now because I’m vaccinated.”

Saltwater Rinse Gains for Oral Wellness and How to Make It

Wed Jun 16 , 2021
Mouthwash can be handy to freshen your breath and cleanse locations your toothbrush just can’t reach. Having said that, saltwater rinses are typically more affordable and can be similarly effective in improving upon your oral wellness and hygiene, suggests Dr. Chris Kammer, DDS, a dental surgeon. “Saltwater rinses get rid […] 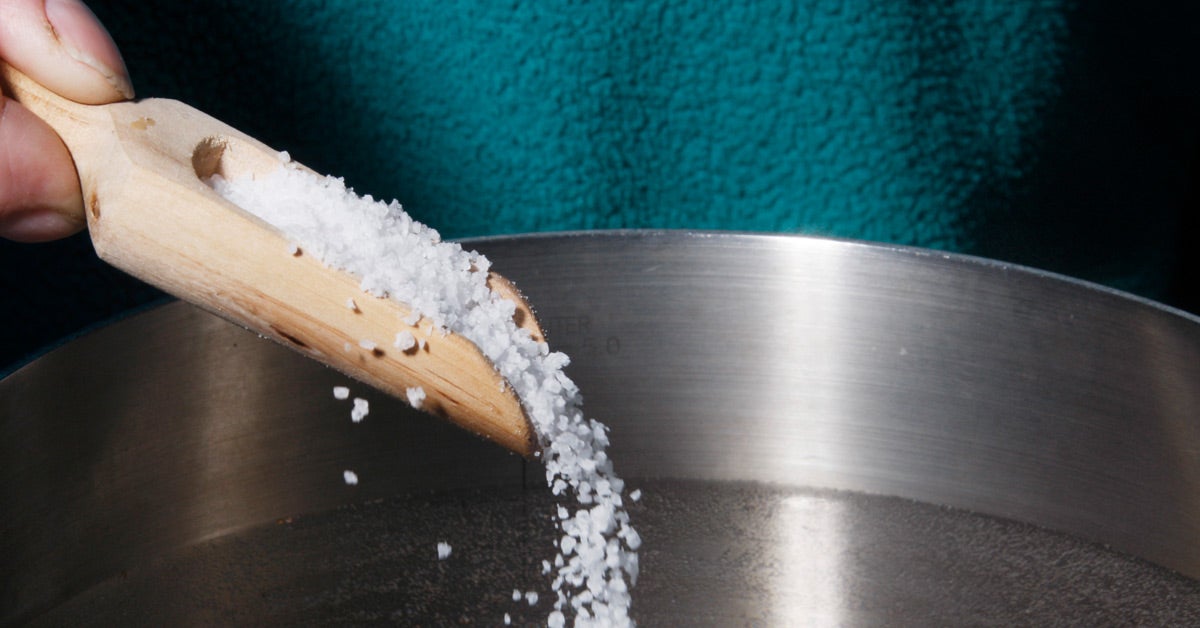