They’re “how we survive,” said Barlow, a senior analyst with the city of Eugene’s employee resource center — what the city calls its revamped human resources department.

“The more diverse something is, the more options it has to be successful,” said Barlow, who describes herself as a woman of color.

Multiple national studies have shown companies and organizations that are more diverse are more successful, and increased diversity in government agencies, such as law enforcement, builds trust with the community.

Eugene, Springfield and Lane County have turned those findings into practice in recent years, striving to have their government workspaces be more inclusive and seeking more diverse applicants.

All three provided data on how employees say they identify racially and ethnically. The data is current as of the end of December or January. A Register-Guard comparison of that government-provided data and census demographics shows the cities and the county still have progress to reflect the racial and ethnic diversity of the community.

For city and county leaders, though, it’s about more than the numbers. It’s about creating inclusive workplaces and creating a work culture that supports diversity.

“It’s been an area of frequent conversation for me since I got here in 2017,” said Chaim Hertz, human resources director for the city of Springfield. “We’ve had steady growth and progress, but not to the degree that we want.”

All three entities have changed their recruitment strategies in recent years, including looking at applications without information on race and expanding where they send out applications. They’ve made some progress and hope to make more to better reflect the community.

Lane County, Springfield and Eugene aren’t all that diverse to begin with.

According to U.S. Census Bureau Quick Facts, 89% of county residents identify as white.

Those numbers are slightly lower in the county’s two biggest cities – 85.2% of Springfield residents and 83.3% of Eugene residents identify as white, according to estimates based on census data.

When it comes to race, many people who identify as non-white don’t identify as any one particular race, but rather as multi-racial.

Between 4% and 6% of residents in the county as a whole and in both Eugene and Springfield identify as a mix of two or more races.

Around 10% of people identify as Hispanic or Latino:

Hispanic and Latino are broad terms that describe people descended from Spanish-speaking populations and from countries in Latin America, including Mexico, Cuba, Peru and many more. Both are ethnicities and can include people identifying as many races.

There’s census data particular to individual ethnicities, such as Mexican, Cuban or Peruvian, but all three units of government provided data on people who identify as Hispanic or Latino in generalized terms and in a way that equated it with race.

Representation varies for Native Americans and those native to Alaska. Those who identify as such make up about 1.6% of Lane County residents, 0.9% of Eugene residents and 1.7% of people living in Springfield.

The number of people identifying as Asian also varies, from 1.6% in Springfield to 3.2% in Lane County to 4.5% in Eugene.

Less than 5% of people identify as some other race or declined to answer:

Lane County has the most diverse workforce despite having the least diverse overall population.

Three races are represented at equal or greater levels among staff overall than they are in the general population:

One group isn’t represented at least equally in any department — no department has at least 3.2% of staff members who identify as Asian.

Springfield, which is slightly more diverse than Lane County as a whole, has the least diverse workforce — 90.7% of employees identify as white, compared to 85.2% of the population.

Two departments — the city manager’s office and human resources — are staffed by only white employees.

Only the city attorney’s office and police department have a staff that’s at least 10% racially and ethnically diverse.

Still, three races are represented at equal or greater levels among staff overall than they are in the general population:

The other two races or ethnicities the city tracks among staff are underrepresented.

Eugene is somewhere in the middle, with 85.2% of staff identifying as white compared to 83.3% of the population.

Only one department — library, recreation and cultural services — has more people identify as non-white than the overall population. In every department, though, at least 10% of staff identify as racially or ethnically diverse.

Three races are represented at equal or greater levels among staff overall than they are in the general population:

Another three are underrepresented:

According to data provided by governmental units, supervisors — who have more power and influence and typically make more than non-supervisory employees — are much less diverse than the overall population.

For continuity in information on supervisors, The Register-Guard asked for data on people who supervise two or more employees.

Supervisors in Lane County are the most diverse, with 14.8% identifying as non-white and each race and ethnicity represented.

Supervisors in Springfield are almost all white. Only one minority is represented among the group — 5.4% identify as Hispanic or Latino.

Three minority groups — people who identify as Black, Asian and Hispanic or Latino —  are underrepresented among supervisors across all three units.

As a smaller entity, he said, Springfield doesn’t have a lot of positions open in general at any given time.

When positions are open, some have a “pretty small applicant pool,” Hertz said, pointing to positions in departments like planning that require specific certifications.

Though the county is a bigger employer, some departments have very little turnover, meaning there aren’t often chances for people to apply who might be more diverse than past applicants, Laura Vinson said.

She pointed to the Sheriff’s Office, in which sworn positions “require extensive steps in the hiring and offer process.” Two of those steps are a physical abilities test and a written exam, she added, and some people simply don’t show up for one or both of those. In 2019, she said, 228 individuals didn’t show for at least one of their testing appointments.

There are some perception issues, too, Vinson said.

“I think there was a myth that it was really hard to get a job at the county,” Vinson said.

That might discourage some people from applying, she said, but the county tries to meet people where they are and talk about where they might fit within the county workforce.

People also generally don’t view government jobs as “sexy,” Vinson said. She loves talking to students who might not have thought about working for the government and explaining to them what it might actually look like.

There also are limitations because of how some jobs are portrayed in media, Barlow with Eugene’s employee resource center, said.

The city tries to make sure people know they don’t have to be the stereotype of a firefighter or a sanitation worker or any other position to apply, she said.

“We want everyone to have that option to think about, ‘Is this for me?’ ” she said.

There have been additional challenges recently, Hertz said.

Because of the pandemic, he said, recruiters can’t interact with potential applicants at job fairs and schools.

The pandemic also has presented opportunities, though, Barlow said.

Making sure staff reflect the diversity of the city is an ongoing challenge, Barlow said, and officials are trying to address it “on more of an organizational level.”

They’ve started to look not just at where they’re advertising, but what’s included in the advertisement, she said.

During the pandemic, staff have been able to “slow down and be more thoughtful about the hiring process,” Barlow said.

The city is working on using a new lens, she said.

That includes literally changing the way they look at applications during some points of the process.

When looking at an applicant’s minimum requirements, Barlow said, staff now do a blind read — they look at the information without identifying factors like name, race, ethnicity and gender.

The city doesn’t provide that kind of identifying information until an applicant gets to the interview stage, she said.

All three entities continually are looking at their recruitment process to see what changes they can make, staff said, whether that’s where they post jobs online and recruit in person, how they look at applications, what applicants do during the process or other adjustments.

For example, people applying for positions in Eugene have more choices for gender identity or can choose not to identify, Barlow said. Staff in the employee resource center also have “latitude and flexibility to take things out of applications or change pre-qualifiers for information that doesn’t affect a person’s ability to do the job,” she said.

In Springfield, HR staff adjusted the language around education and experience, Hertz said, so people know it doesn’t have to be “spot on.”

Sometimes it comes down to just talking to people about what they can do, Vinson said. She holds application workshops “all over” the county.

“The application process is rigorous, so breaking it down and being transparent to folks provides them the confidence to submit applications, which is the goal of the workshop,” she said.

Officials want the ‘best people’ to want to work in government

There have been some successes.

Since 2014, people applying for jobs in Lane County have become more and more racially and ethnically diverse.

And staff are looking for more success in drawing a diverse range of applicants.

That leads to more success, Hertz said, because “success and diversity go hand in hand.” It goes beyond that, he added, to building an environment where people want to work and employees thrive.

“We want the best people in the local area to want to work for the City of Springfield,” Hertz said. “We want it to be a welcoming and inclusive environment.”

Barlow echoed that it’s more than just a check box.

It’s about looking at what needs to change and challenging each other, she said.

“It’s not any one thing,” Barlow said. “We’re not trying to get to a magical number.”

The goal, she said, is to create a place where people want to live and work and where they can be who they are.

Mirror neurons: How our toddlers are finding up on our pressure

Thu Mar 18 , 2021
Neuroscientist weighs in on how tension during the pandemic is affecting mothers and the total spouse and children. HARTFORD, Conn. — A current report from the Bureau of Labor Figures confirmed that almost 1 million moms have dropped their careers because the onset of the COVID-19 pandemic a year ago. […] 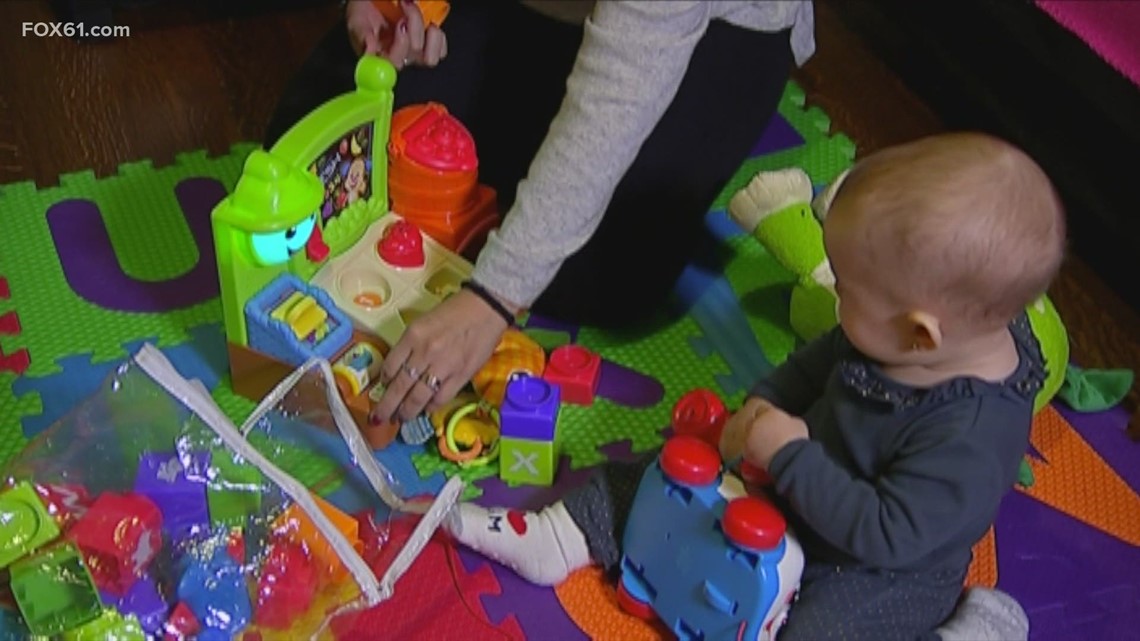